At three children began to express themselves a great deal more through language and humor. They enjoy telling stories and using their imagination, often by relating to fictional animal characters. At three, a child will began to form friendships with more than one classmate, and play with several children at the same time. He or she will also begin drawing simple shapes, identifying most common colors, and began to speak in short sentences.  It is important to teach a three year old how to follow directions because they often enjoy doing simple tasks. This is the age that a child will began to form some lifelong habits; so again, it is important to teach them good habits early. Our three year old class offers structure through teaching and play. 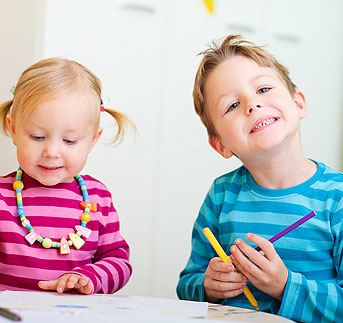 WHAT PARENTS ARE SAYING!

"My son went this past school year and we absolutely love the staff and teacher would highly recommend this place to everyone also the teacher Mrs.Jessie is the best teacher ever my son could not have had a better first teacher."
- DONNA

We currenly have openings in all of our classes.  This includes ages from 24 months to school age.  Please contact our center to get information on registering today.